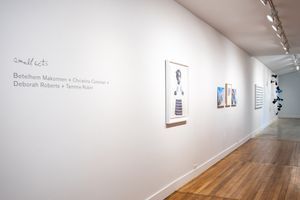 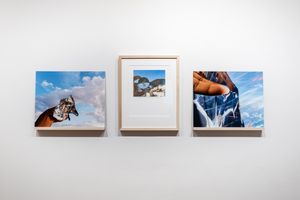 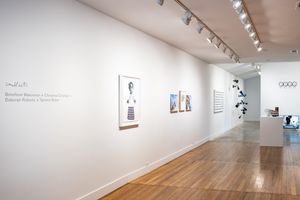 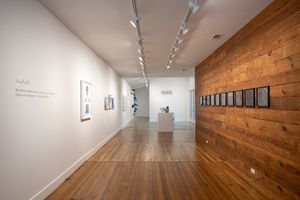 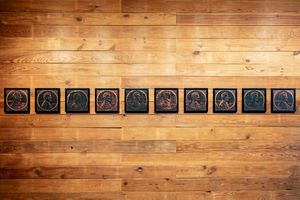 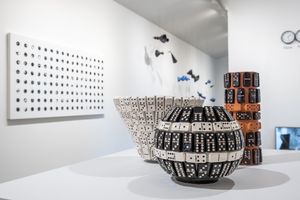 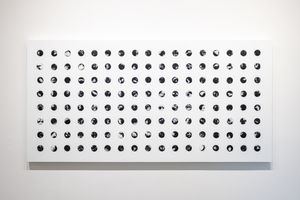 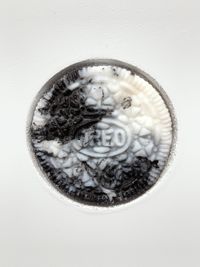 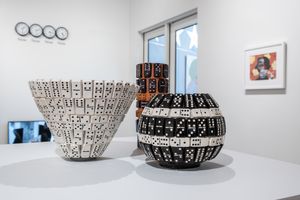 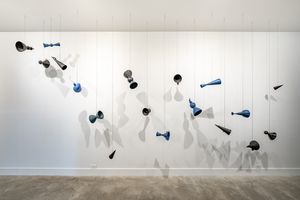 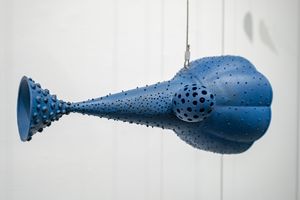 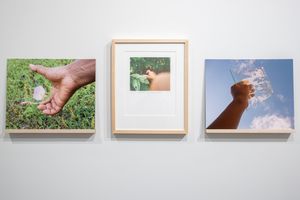 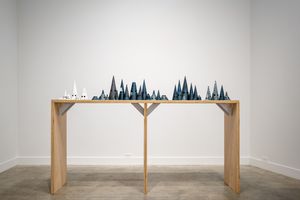 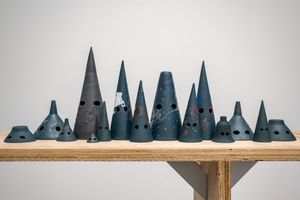 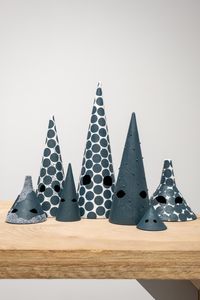 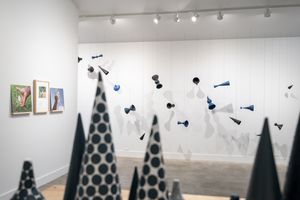 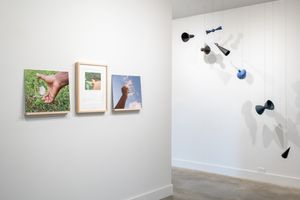 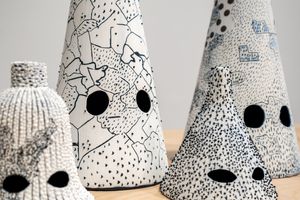 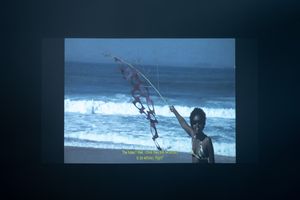 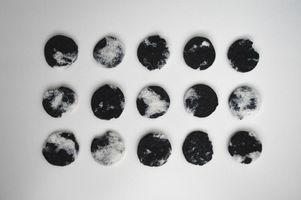 small acts is an exhibition of various mixed media works–including collage, drawing, sculpture, video, and photography–by four Austin-based artists. Betelhem Makonnen, Christina Coleman, Deborah Roberts, and Tammie Rubin. To change one's future, to change perception, or even how we treat others is all a result of a small act. The artworks on view range from investigations of black existence through body, object, beauty, childhood and familial narratives, fugitive perceptual experiences, and time. While each artist's aesthetic approach is different, they are united by their faith in the power of small acts to guide and reimagine our everyday existence.

For Coleman and Rubin, the small act is in the recognition of the everyday. Both artists look at how mass-produced everyday objects transcend banality. Coleman’s media inventory includes dominoes, Oreo cookies, and synthetic hair. She presents works that situate these seemingly insignificant objects amidst spaces that hold great value. For instance, Coleman draws parallels between entities in cosmic space and Oreo cookies. Her interest lies in the interplay between the small and the vast, and how the former has the potential to give meaning to the latter. Within her work, dominoes become ceramic vessels and Oreo cookies are transformed into lunar phases. Rubin’s Always & Forever (ever, ever) series comprises conical groupings that reference objects of power, fraternity, anonymity, pageantry, absurdity, and belief. The sculptures are multi-part porcelain casts of recognizable consumer forms that reference hoods, headdresses, hats, and helmets. From the Ku Klux Klan and the Catholic Brothers of the Nazarene hoods, dunce caps, wizard hats, to west African Headdresses, medieval helmets, and the cone-wearing figures in Hieronymus Bosch paintings, these intimate ensembles are suspended within familiarity, uncertainty, and foreboding.

Makonnen and Roberts seek to disrupt perceptions. They believe their small acts and gestures can provoke radical new possibilities for perception and being. Makonnen’s artistic line of inquiry lingers in spaces of virtual conjunction accessed through paradoxes and feedback loops. Working with video, photography, and installations, she focuses on questions of perception, presence, and place while navigating within the trans-temporal and trans-locative topology of her diasporic consciousness. Her work seeks material equivalences that reflect a conjugated present, recognizing the future and the past as forms of the present, present in the present. The hand is always present. All of the above informs Makonnen to create a perceptual language that challenges normative structures of visuality and binary thinking in our cultural contexts. Roberts combines found and manipulated images with hand-drawn and painted details to create hybrid figures. These figures often take the form of young girls and increasingly Black boys, whose well-being and futures are equally threatened because of the double standard of boyhood and criminality that is projected on them at such a young age.

The works in this exhibition speaks to the notion of small acts in our lives that change how we are perceived and how those perceptions guide us in our everyday life.

A native of Ethiopia, Betelhem Makonnen (b.1972, Addis Ababa, Ethiopia), lives and works in Austin, TX. She received an MFA from the School of Art Institute of Chicago and a BA in History and Literature of Africa/African Diaspora from UT Austin. Her work researches perception, presence, and place within a trans-temporal and trans-locative topology that operates on the relational dynamics of an African diasporic consciousness.

Christina Coleman (b.1984, Los Angeles, California) is a visual artist working in sculpture, drawing, and installation. She holds an MFA from the University of Texas at Austin and a BA from the University of California at Los Angeles. Utilizing various materials, ranging from commercial hair care products to traditional fine art tools, Coleman works through subjects including the human body, space, identity, and materiality. Her work has been exhibited in solo and group exhibitions nationally including: A Spatial Continuum in Black at Texas A&M International University, Laredo, TX; Collecting Black Studies: The Exhibition at The Christian-Greene Gallery, The University of Texas at Austin, Austin, TX; I Know Why the Caged Bird Sings at The George Washington Carver Museum and Cultural Center, Austin, TX; Lone Star at The Cecille R. Hunt Gallery, Webster University, St. Louis, MO; The First Horizons of Juno at Mass Gallery, Austin, TX. From 2016 to 2017 Coleman was a co-curator at de stijl | PODIUM FOR ART, a gallery in Austin, TX. Her work is included in private and public collections including Black Studies, The University of Texas at Austin.

Deborah Roberts (American, b. 1962) is a mixed media artist whose work challenges the notion of ideal beauty. Her work has been exhibited internationally across the USA and Europe. Roberts' work is in the collections of the Whitney Museum of American Art, New York, New York; Brooklyn Museum, New York, New York; The Studio Museum in Harlem, New York, New York; LACMA, Los Angeles, California; the Virginia Museum of Fine Arts, Richmond, Virginia and the Blanton Museum of Art, Austin, Texas, among several other institutions. She was selected to participate in the Robert Rauschenberg Residency (2019) and was a finalist for the 2019 Outwin Boochever Portrait Competition, as well as the recipient of the Anonymous Was A Woman Grant (2018), and the Pollock-Krasner Foundation Grant (2016). Roberts received her MFA from Syracuse University, New York. She lives and works in Austin, Texas. She has a solo exhibition opening Fall 2020 at The Contemporary Austin. Roberts is represented by Stephen Friedman Gallery, London and Susanne Vielmetter Los Angeles Projects, CA.

Tammie Rubin (b. Chicago, Il) is an artist whose sculptural practice considers the intrinsic power of objects as signifiers, wishful contraptions, and mythic relics, while investigating the tension between the readymade and the handcrafted. Using intricate motifs, Rubin delves into themes involving ritual, domestic and liturgical objects, mapping, migration, magical thinking, identity, and sensual desire. Her sculptures open up dream-like spaces of unexpected associations and dislocations. Rubin received a BFA in both Ceramics and Art History from the University of Illinois, Urbana-Champaign, and an MFA in Ceramics at the University of Washington in Seattle. Rubin has exhibited widely, selections include the Hessel Museum of Art at Bard College, Annandale-on-Hudson, NY., The Houston Center for Contemporary Craft, TX., George Washington Carver Museum, Austin, TX., Evansville Museum of Arts, History, & Science, IN., Rockford Art Museum, IL., Mulvane Art Museum, KS., Women & Their Work Gallery, Austin, TX., Charak Gallery at Craft Alliance, St. Louis, MO., and the Sarah M. Hurt Gallery at the Indianapolis Art Center, Indianapolis, IN. She is represented by Galleri Urbane, Dallas, TX., & Rivalry Projects, Buffalo, NY.

Rubin’s artwork has received reviews in online and print publications such as Artforum, Art in America, Glasstire, Austin American- Statesman, Austin Chronicle, Sightlines, fields, Conflict of Interest, Arts and Culture Texas, Ceramics: Art & Perception, and Ceramics Monthly. She founded Black Mountain Project along with fellow Austin-based artists Adrian Aguilera and Betelhem Makonnen, and she is a member of ICOSA Collective, a non-profit cooperative gallery. Born and raised in Chicago, Rubin currently lives in Austin, Texas where she is an Associate Professor of Ceramics & Sculpture at St. Edward’s University.