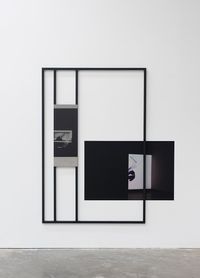 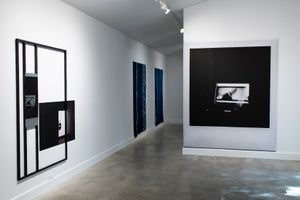 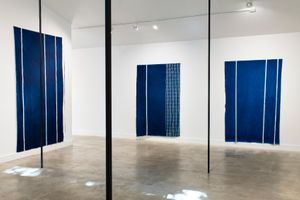 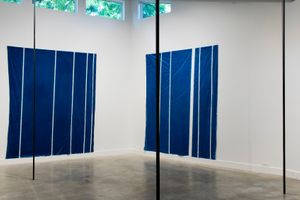 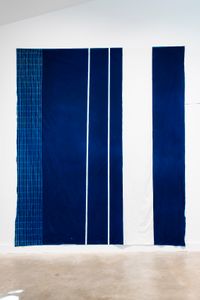 Mathieu Grenier wants you to unlearn images; or at least their instrumentalization as conduits to a fixed reality. Despite decades of theorists ruminating and exposing, decrying and demystifying, photography, unlike painting which benefits from a long-established language of abstraction, still has trouble escaping the undertow of its own content. When faced with a photograph, our brains have a habit of looking through its surface to scavenge for meaning within representation. We see therefore we understand…or so we think. Grenier’s work seeks to interrupt this cognitive reflex by erecting an indeterminacy that draws attention to the opaque substance of the photographic object. Such a deconstructive project may make for a puzzling viewer experience, but it is one that encourages a receptiveness to what photographs have to offer beyond mimesis.

Situating his art at the intersection of photography and sculpture, Grenier’s practice consists, in part, of toying with a multitude of photographic processes, from the purely chemical to the ethereally digital. His Field Works series marks his foray into the deep-blue realm of the cyanotype. One of the earliest photographic techniques developed in the 1840s and used well into the twentieth century for architectural blueprints, cyanotypes are produced via a contact printing method that requires no camera. For this body of work, Grenier saturated large cotton sheets with a light-sensitive solution and exposed the textile to the sun beneath a combination of metal rods and grating. The resulting works are more reminiscent of the abstract expressionist canvases of Barnett Newman and Mark Rothko than what we would recognize as photographs; and yet they are, true to the word’s etymological roots in the Greek photos and graphé, “light drawings.” In their quivering aqueous blues, Grenier’s cyanotypes are of the same ilk as Victorian botanist Anna Atkins’ seaweed photograms, but they do not share their ambition to elucidate. Rather, they refuse to give us a familiar object to recognize and, in doing so, they set up a gap. Californian writer Rebecca Solnit has spoken at length of “the blue of distance” which to her “is the color of an emotion, the color of solitude and of desire, the color of there seen from here, the color of where you are not. And the color of where you can never go.” It is this state of thwarted or not quite satiated desire that Grenier’s Field Works evoke most strongly.

In Expanded Nomenclature, which chronicles the artist’s engagement with projected moving images, it is not the chemical process that Grenier meddles with, but the conventional limits of photographic formats. The centerpiece of this more recent series is a Polaroid picture—a species of photograph that carries with it connotations of family snaps, instantaneity, and the commercial enthusiasm of the 60s and 70s. But instead of cozy technicolor, Grenier presents us with an indistinct image, dark except for a glowing laptop that’s overexposed screen is difficult to decipher. The iconic white Polaroid frame is instantly legible, but the anachronistic appearance of the image confounds. Grenier then pushes things further by enlarging the hand-sized square—another element that makes a Polaroid so recognizable—to gigantic dimensions and printing it, in black and white, on vinyl wallpaper that nullifies the original’s gloss. The translated image that we are left with is no longer materially constituted of Polaroid film; and yet it partakes in a form that, even when blown out of proportion, is unmistakable.

Photography, in Grenier’s hands, is not just “about” what is pictured. Indeed, many of the images in this exhibition are resistant to our habitual decoding of photographs: some are unceremoniously cropped, others are traversed by blurs, and none provide narrative hooks on which a viewer can hang a storyline. We are perhaps in the realm of poetry, but we have been dropped there without a roadmap. But rather than leaving us to clutch at semiotic straws, it is in their devotion to the grid that Grenier’s pieces invite interpretation. For the steel rods common to both projects are more than just convenient complements, they are integral to our apprehension of the photographs. Not only does their metallic geometry call out to the rectangles pictured within the images (windows, walls, computer screens), but it highlights the rectangularity that haunts all photography. The severe lines, weighty and cold, furnish a structure which the photographs at times respect and at others flout. “The grid’s mythic power,” writes Rosalind Krauss in her seminal essay on the subject, “is that it makes us able to think we are dealing with materialism (or sometimes science, or logic) while at the same time it provides us with a release into belief (or illusion, or fiction).” Or, in Grenier’s case, into enigma. Though spelled-out answers remain absent in this pair of projects, what does emanate is the artist’s urge to upend simplistic conceptions of the photographic medium, whether he happens to be looking through a viewfinder or a welding mask.

Mathieu Grenier’s work focuses on the modes of capture and presentation of the image. His elegantly sparse aesthetic reflects an understanding of the photographic medium and its relevance in contemporary culture.

The way I work is driven by an intention to deconstruct photography. For me, photography is an opaque window to the ‘what was once.’ It is with their levels of opacity that the photographs let the viewer access the other side of the surface or bounce back into space. My current research focuses on how display technologies structure our perceptions of space and image. This is something I feel is always altered by the physical medium used: the image appears through screens, projections, different types of papers, etc. I feel the image reveals itself through a defined space, which conveys a formatted and limited experience. I experiment with techniques that expand photography from its fixation on a 2D surface. Through the creation of objects that are intertwined with images, I intend to explore how images can occupy a physical presence into space by combining the practices of photography and installation art. Through assemblages and alternative photography processes, I try to bring out the physical materiality of the image within its production and exhibition context.

Mathieu Grenier lives and works in Austin, TX and Montreal, Canada. He holds a B.F.A. in Visual and Media Arts from the University of Quebec in Montreal and he is a current M.F.A. candidate in Studio Art at the University of Texas in Austin. Mathieu had solo exhibitions in Montreal at René Blouin Gallery, Arprim artist run center, Roger Bellemare Gallery, in Chicoutimi at Le Lobe artist run center and in France at Centre d’art La Halle. He participated in numerous group shows in Canada, in France and in the United States. Grenier will be attending the Royal College of Art in London next fall as part of the RCA/UT exchange program. He will be presenting solo exhibitions at René Blouin Gallery in Montreal, Plein Sud artist run center in Longueuil and L’imagier exhibition center in Gatineau. He has been awarded the 2014 Charles Pachter’s prize for Canadian emerging artist from the Hnatyshyn Foundation. Mathieu Grenier’s work has been supported by the Canada Art Council, the Conseil des Arts et des Lettres du Québec and the Montreal Art Council.