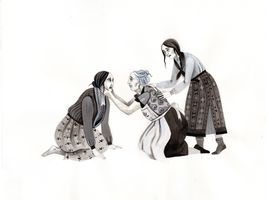 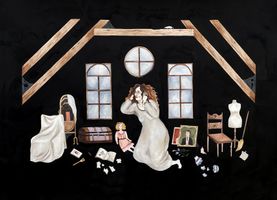 In 2018, I decided to shift my focus away from female archetypes and folklore to explore some of the harder things we go through in life such as violence, loss, mental illness, fear, and trauma. I turned mostly to film, music, and my own life experience for inspiration, and almost 3 years later, this show is the result.

Although the themes are, at their core, abstractly emotional, archetypes have found their way into the work: The madwoman, the pioneer woman, the final girl, the mother, the victim, and the survivor. As I sought ways to tell stories about some of the hardships we face in life, these figures presented themselves to me, so I used them to populate the work. An unexpected thing happened as I was developing these pieces: the women started showing up for each other.

They began to tend to one another and hold space, which was a relief. I was starting to feel bad for what I was putting my characters through. This mirrors my own life. I have always been lucky to know incredible women, but as the pandemic continued and I got deeper into the work’s subject matter, these bonds strengthened, and I have received some of the most wonderful support from other women.

As with my earlier work, these pieces take the form of ambiguous narratives, and are intended to create space for each viewer’s personal interpretation. I may have a feeling I was trying to capture with each piece but am happy for every person to bring their own life experience and perspectives to the work and walk away with something different from the next person.

My goal, whether with illustration, painting or sculpture is always to tell stories. These stories are drawn from my own personal trauma, my friend’s lives, the world around us and our history. I hope some viewers can find pieces of themselves in these stories and feel seen.

Katy Horan is a Texas-based artist and illustrator whose work often explores female archetypes and the role of the feminine in history and mythology. She received her BFA in Illustration from the Rhode Island School of Design in 2003 and has since exhibited in solo and group shows throughout the US and Canada. Her work has been published in 3 issues of New American Paintings (#90, #120 and #150), was included in the 2011 Texas Biennial, and she was a finalist for the 2015 Hunting Art Prize. Her illustration clients include Cadabra Records, Severin Films, and Birth. Movies. Death. She illustrated the books Literary Witches: A Celebration of Magical Women Writers, which has been published in 6 countries and was an NPR Great Read in 2017 and Ask Baba Yaga: Poetic Remedies for Troubled Times as well as The Literary Witches Oracle deck, all in collaboration with writer Taisia Kitaiskaia.