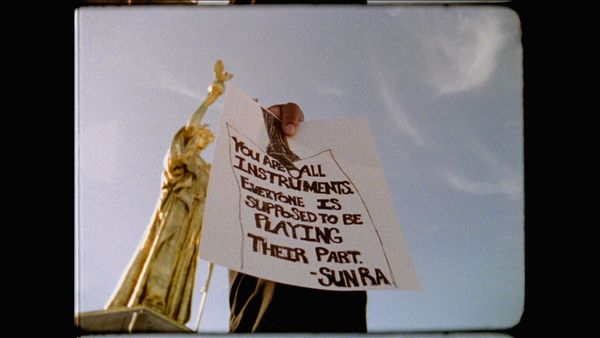 Experimental Response Cinema is proud to present THE WAY OUT IS THE WAY TWO, a feature-length “constellation of 14 short films” by acclaimed artist and filmmaker (and former Austin resident) Cauleen Smith, with the artist in person. The Way Out Is The Way Two, produced over a period of four years, is an interlocking series of shorts ranging in subject from African-American identity, the psychogeography of the city of Chicago, Afrofuturism, and the ideas and music of Sun Ra.

Cauleen Smith (born Riverside, California, 1967) is an interdisciplinary artist whose work reflects upon the everyday possibilities of the imagination. Operating in multiple materials and arenas, Smith roots her work firmly within the discourse of mid-twentieth-century experimental film. Drawing from structuralism, third world cinema, and science fiction, she makes things that deploy the tactics of these disciplines while offering a phenomenological experience for spectators and participants. Smith is the recipient of several grants and awards including the Rockefeller Media Arts Award, Creative Capital Film /Video, the Herb Alpert Award in the Arts, Chicago 3Arts Grant, the Foundation for Contemporary Arts, Chicago Expo Artadia Award, and Rauschenberg Residency. She currently lives and teaches in Chicago, IL.